Skip to content
Previous Next
Are We Throwing Out the Spiritual Baby with the Religious Bathwater?

Are We Throwing Out the Spiritual Baby with the Religious Bathwater? 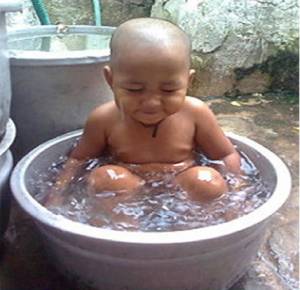 When we look around today, so many of us are troubled by the erosion of civility, the lack of kindness, and the utter selfishness that seems to pervade so many of our institutions. We fret over how easily it has seeped into our everyday lives and we stand by as it flows freely out of our screens, out of our mouths, and down through our keyboards surprising even us with our own bad behavior. I have a theory on how some of this has happened and how we, as parents, can start moving back to a place of kindness and better behavior. The good news is, it’s probably not as hard as you think.

Let’s start with the premise that organized religion has let us down. Not the whole of it, but much of it. Folks argue all the time about whether or not the world would be better off without religion and the truth is, the answer is easily yes and no. Religion has been the source of tremendous pain and suffering, but it has also been the driving force for a stunning amount of goodwill and service to mankind.

Religion has delivered to us many ancient pearls of wisdom that we like to call Spiritual Skills. Practices like forgiveness, gratitude, love of neighbor, and managing the beast that we call our egos are known to almost everyone, but be assured what is not always understood is that those practices have all evolved from one religion or another. Over time, powerful tenets like the Golden Rule, the Commandments, and many sacred creeds and codes found in varying Scripture, have been honed and polished. They are intended to give us strength and moral guidance on this very bumpy road we call life. There is a widespread belief that much personal happiness and peace can be derived from practicing these Spiritual Skills.

In ancient times the essence of these creeds and codes were delivered by small groups in tribal settings mostly through stories that were handed down generationally. As religion became more formalized, it was infused with elements of law, power, judgment, and of course, money. Many feel it was at this point that “the core messages” began to be abused and used to control bad behavior rather than lift up the masses and empower them. People could no longer question the teachings or add their ideas to the mix without rebuke, and this took the immense power of real comprehension away from what had earlier felt like the truth. Much of humanity started to go through the motions of religious exercise, without true understanding of the deeper meaning that those rituals were meant to impart. Religion for many became lifeless, tedious, and dry as a bone.

And so it stands today that the old school methods really aren’t working and for a myriad of reasons the younger generation (many starting families) are turning away from churches, mosques, and temples feeling like there isn’t much of an alternative for themselves or their children. Wanting to put some space between themselves and organized religion, this emerging group is commonly referred to as “the nones” and is growing quickly. It is not surprising that we aren’t finding time to shop for new ways to connect…we are distracted, exhausted, and frankly, want to be entertained. But what is much, much more important is that many parents have decided that they don’t want someone sitting their kid down and telling them, “This is what you believe!”. That behavior is a set-up to the end of critical thinking and is often called “received theology”. There are so many parents who no longer want to outsource their kid’s faith education, yet they feel woefully unqualified to handle it themselves, so they do nothing.

Doing nothing, however, and hoping for the best is most definitely not the answer and sadly, this stance has the potential to leave the next generation spiritually bankrupt. What we are losing on this path is the intentional gathering of adults and kids in order for everyone to garner some wisdom and learn spiritual principles. Between school, sports, music, and all of the other physical and academic activities, many kids are already programmed so heavily that they cannot rub two quiet minutes together, but those activities are primarily outwardly focused. Having both kids and adults turning inward for better guidance is the goal. Consider it an exercise to improve the connection to your internal GPS. Whether or not you have a religious home or school, it is such a healthy practice to spend some time delving into tough topics with your kids. We all know that our children are our best teachers and parents always tell me how much they learn themselves when they spend just 45 minutes a week in thoughtful conversation with their children.

If you want to build strength of character and critical thinking skills in the kids you are raising or mentoring, you should start the conversation early and talk you must! The window to talk to your children about tough topics is a small one. It begins to open at age 5 or 6 and often begins to close around ages 11 or 12. As a parent, it is easy to watch those years fly by and later realize that genuine substantial dialogues with your kids had rarely happened. If there isn’t a time set aside for some focused spiritual conversation and play, that small window of opportunity closes and the separating adolescent starts to move on. In order to not regret missed opportunity, back to the earliest tribal ways you must go, setting some structured time every week to sit around and just talk with your kids. Don’t be intimidated!!! Take it slow and start with simple topics like forgiveness or gratitude and build up to the tougher ones. Just because you’re not sure what you believe, don’t avoid the conversation. You will be amazed at how many ideas they already have and they won’t think any less of you if you say “I’m not sure” or “let me get back to you on that one”.

There are plenty of resources, books, music, videos, and more to help support you. Whether you use our program, another program or just find a regular time to talk WITH your kids from the heart, you can be confident that engaging your kids in thoughtful dialogue will naturally allow them to develop their gifts of critical thinking and grounded coping skills. Another great benefit that comes along with this package, is that if you and your kids get in the habit of talking about difficult things, they will be much more likely to turn to you again as they grow older . Best of all, this practice is something tangible that you can do for the greater good and may just be the most important action you can take towards steering this planet back onto a path of kindness and civility.