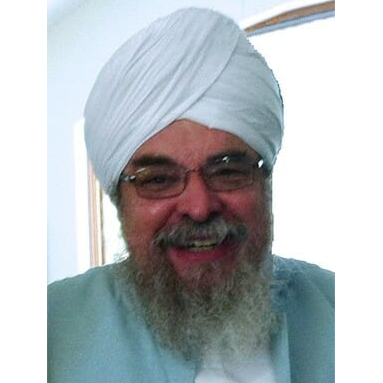 Shiva Singh Khalsa is the President & Chief Executive Officer of the Spirit Rising Foundation. Shiva Singh’s parents were first generation immigrants who left him with a wealth of spiritual lessons. In a Bible found 5 years after his passing, his father had written a message to him which said “Never hesitate to go to the aid of the unfortunate for fear of ingratitude.”

In 1971, after some Hatha yoga practice, he was introduced to Kundalini Yoga. It made profound changes in his lifestyle, not least of which was to manage frequent grande mal seizures without medication through meditation, yoga and diet. It was this and the magnificent community that was blossoming around the teachings of Yogi Bhajan that saw him make a conscious commitment to this path in 1973. Often asked why he embraced the Sikh faith, he answers that he unknowingly treasured the Sikh values, and when it was placed before him he realized it was “all he’d ever wanted”. He was ordained a Singh Sahib, Minister of Sikh Dharma in 1983 and has served the Sikh community in a variety of ways.

Shiva Singh has received many honors and awards for his work in service to communities as an AIDS activist, as a foremost advocate for South Asian elderly and especially those neglected and abused and his work with preventing domestic violence against women.
Shiva Singh studied personally for the over 35 years with Yogi Bhajan, his spiritual mentor and beloved teacher. He has practiced and taught thousands of hours of Kundalini Yoga and Meditation and White Tantric Yoga making him one of the few teachers in the Midwest certified by Yoga Alliance as an E-RYT 500, Experienced Registered Yoga Teacher at the 500 Hour level. He is a Senior Level 1 and Level 2 Teacher Trainer. He has been the director of 3HO Foundation planned living communities called ashrams, and has had the honor of training teachers and impacting lives of people spread around the world. Shiva Singh emphasizes that Kundalini Yoga, not a religion, is a transformational psycho-technical practice.

He is on the staff that organizes the annual Summer Solstice Yoga Camp in New Mexico which attracts 1800 serious seekers each year to the high desert mountains for transformation and renewal. In 2002, he was honored for his years of service by Yogi Bhajan.

In his role as minister and community organizer, he helped found the groundbreaking Rogers Park Inter-religious Partners, a group of 20 faith traditions in the Chicago area in dialogue, collaboration and cooperation to use their faiths as bonds to increase the harmony, trust and community in their neighborhood. He was a key organizer of the Sikh participation in the 1993 Parliament of the World’s Religions in Chicago and he traveled with Yogi Bhajan in 1999 to the Parliament in South Africa and was influential in manifesting an historic meeting of Sikh leaders from all over the world.

Shiva Singh worked for many years in the health care industry including marketing and admissions in skilled care facilities and as an elder-care adviser. Currently he is Executive Director along with his wife, Shabad Kaur, of Solutions for HomeCare, a company providing in-home care services to the elderly, frail and those recovering from surgery.